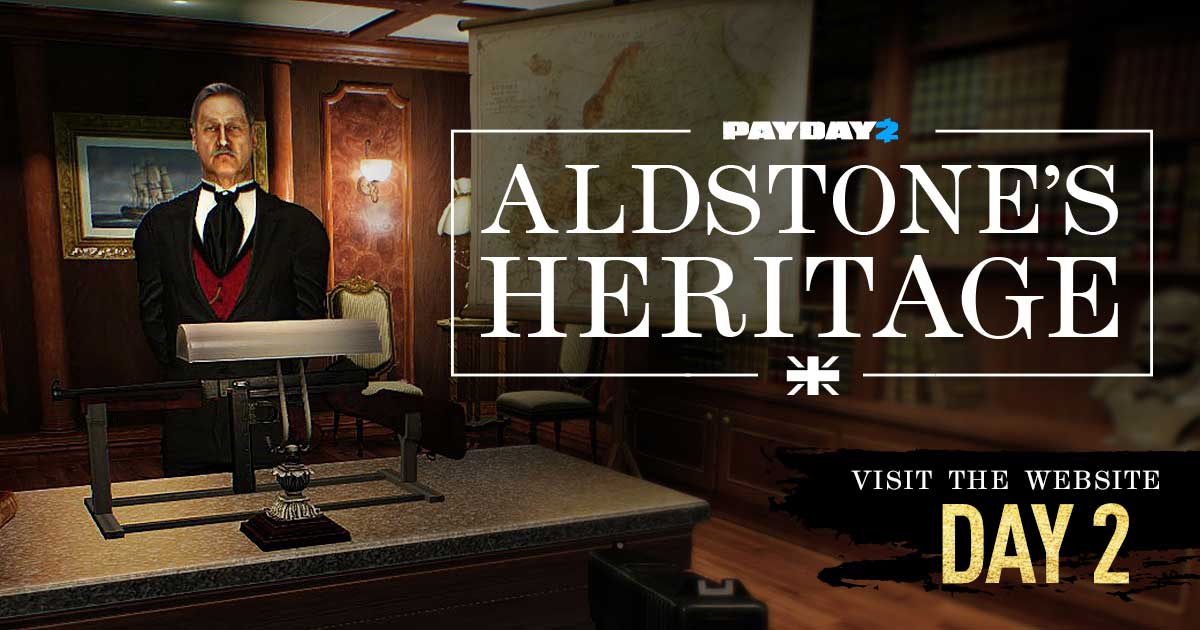 We hope you all had a jolly good time finding the last missing trophies to make Aldstone’s new room complete. With today’s update we are not only releasing new masks, weapon skins and armor skins but also the long awaited Armor Workshop.

Day 2 of "Aldstone’s Heritage[www.paydaythegame.com]" is live! Check it out for yourself and don’t forget to come back tomorrow for the final day!

Mud, camouflage, or legendary engravings? The new WW2 Weapon Safe has it all. Don’t worry, we didn’t forget about the yesterday released weapons! Enjoy your new Parabellum Pistol, MP40 or Galant Rifle in a completely new light.

Russia, Germany or Britain. On the ground, up in the air or on the water. Look like a german camouflage soldier at the front line or a highly ranked Navy Admiral. It is your choice! With this new Safe, 6 war approved skins awaiting you!

You got the weapons, you got the armor! The last piece missing to complete your outfit would be the fitting headwear! Be a part of the PAYDAY 2 community and the new Survivor’s Pilot Hat, Trophy Helmet, Officer’s Hat and a Proud Pilotka is all yours!

Promised during “The Search for Kento” we now deliver the long awaited Armor Workshop. That means, it’s again time to start drawing, utilize your photoshop skills and start making skins!

Never been to the workshop? Click here to find out more: PAYDAY 2: Workshop

Some of you may have already noticed, some not. Yesterday we released the WW2 Weapon Pack, but what we forgot to mention was the new “Slide Lock State” that we added to make the Galant Rifle as authentic as possible. Of course we didn’t stop at the Galant Rifle, this system is also available for all pistols including akimbo but excluding revolvers. But without further explanation, start the game, equip your new Galant, empty that magazine and see for yourself.

[www.raidworldwar2.com]
All PAYDAY 2 players already have access to the RAID: World War II Closed BETA! Not only that, anyone who owns PAYDAY 2 will get an additional 5% loyalty discount during the pre-order period on the base game and 10% on the Special Edition on top of the 10% pre-order discount. Order today and save up to 25% on RAID: World War II.