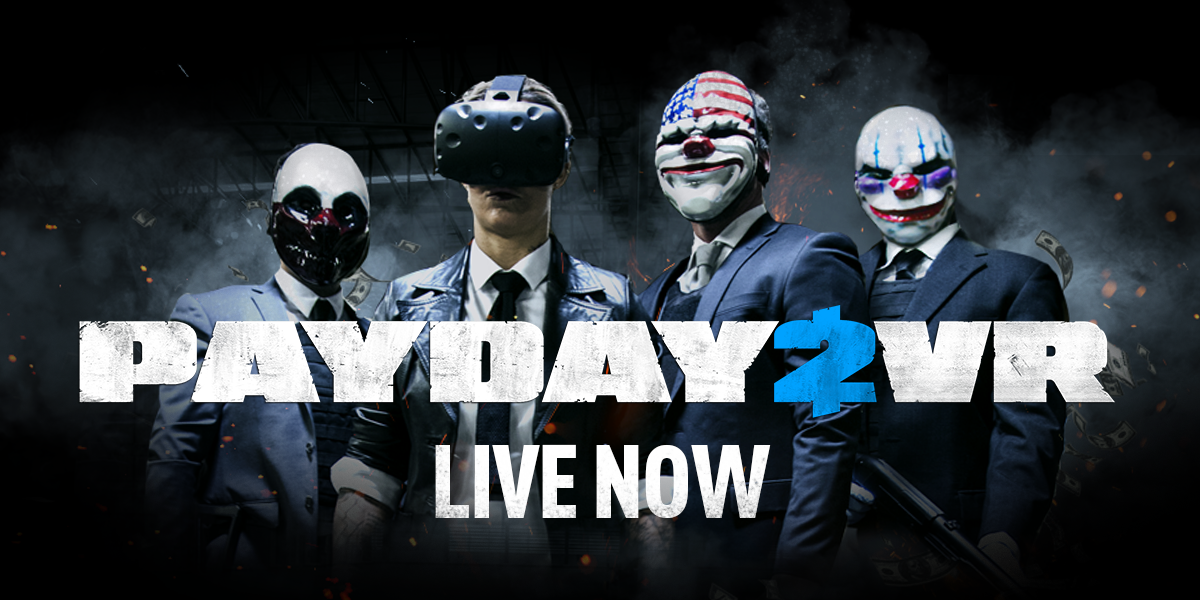 Do the crime, don’t do the time

We are now live with PAYDAY 2 VR in the main game, which means no more switching to the Beta branch for our VR players. We have gotten to a point where we need to continue the work integrated into the full game.Therefore we’d like to invite all of you VR heisters to come and try all the cool features we’ve been working on. Heist together with all your Vive, Oculus or Desktop friends.

Nearly the entire game is now unlocked and available to our VR heisters, with a few exceptions that are still in development. Play all heists with just about all weapons that are available in the game. Bring a sniper rifle with a magnified scope to cover your friends from afar, or why not stand on the front line with an LMG and a rocket launcher? Afterwards you could blast into the distance in a Longfellow packed with goats, it’s your choice!

Save Files from the Beta

If you took part in the Beta you may have noticed that it used a separate save file from the main game. When you start PAYDAY 2 after the update, the game will compare your character levels in both branches, main game and VR Beta. If your progress in the VR Beta is higher than in the main game you will get a prompt to overwrite the progress with your VR Beta progress.

If you choose not to overwrite the data, your old desktop progress will be loaded. The game will automatically save once you enter any submenu or visit CrimeNet.

If you think the correct data was not loaded; quit the game immediately and relaunch. If the game did not save before closing, the prompt to load data will appear again.

How to activate the free PAYDAY 2: VR DLC

With this update a new free PAYDAY 2: VR DLC has been added to the PAYDAY 2 Store page.
You can find the DLC here:
PAYDAY 2: VR
Click download on the DLC store page and it will activate the VR mode. With the DLC active a new prompt will appear everytime you start PAYDAY 2. Here you can choose if you want to play the game in VR or desktop mode.
​

This popup will appear even if you do not have a VR headset plugged in or Steam VR installed.
You can disable the prompt again by deactivating the PAYDAY 2: VR DLC in your list of DLCs in your steam client. You will need to restart the steam client.
​

We worked on making the experience of using the sniper rifles fun and immersive. Choose which scope suits your playstyle. With different magnification levels on the sights, you can now customize your weapon for every situation. Thanks to VR you can now keep one eye on the enemies and the other on your surroundings.

Buckle up and slam the pedal to the metal with our new driving system. You simply grab the steering wheel with the left hand and the accelerator (located by the handbrake) with you right hand. In PAYDAY 2 the cars are automatic, not manual. Push the right hand forward and off you go. The hand break can be activated with the right trigger for some sweet drifting.
The system works the same way for motorcycles and boats, except twist the throttle handle to accelerate. 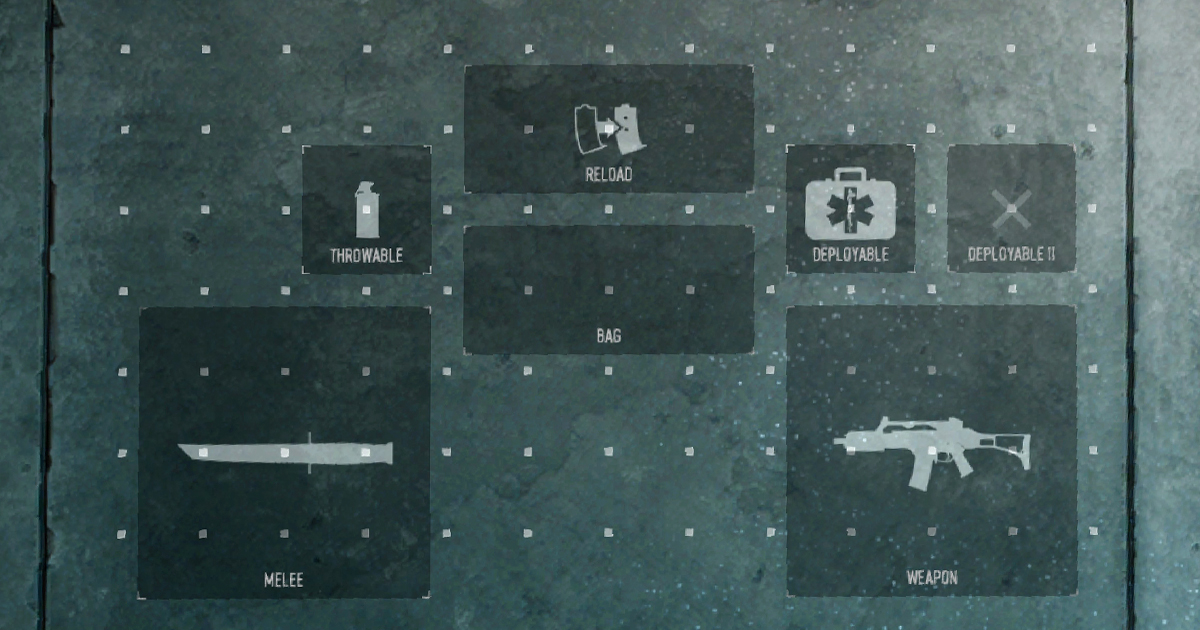 The belt inventory can be customized, so adjust the layout of the boxes to suit your playstyle and needs. Boxes can now be moved around and rescaled in size. Additionally you can also move the belt in any direction and scale it.

While adding this functionality we also added a new default layout of the belt. However, if you played previously you will keep the old layout until you reset the belt or make your own one.

In the new layout you will have quick access to the weapon switch and the melee weapon. Deployables (primary and secondary if you have jack of all trades) can be found on the right side with the second deployable closest to you since you have a quick button on the controller for the primary deployable.

Throwables are located on the left, you can also activate throwables by the quick button on the controller. The loot bags are right in front of you, easy at hand when reach the escape van.

Bows and other features to be added later

We have taken the VR Beta to a point where we feel it needs to be integrated into the main game to proceed further.
Even though many things are added or changed in the game since the latest update to the Beta, there is still more work to be done. We will keep up the the development, so stay tune for further VR updates and keep sending us feedback.

There are a few weapons that did not make it into the release such as the bows. We will of course address this going forward.
These weapons that are currently not available to VR players: 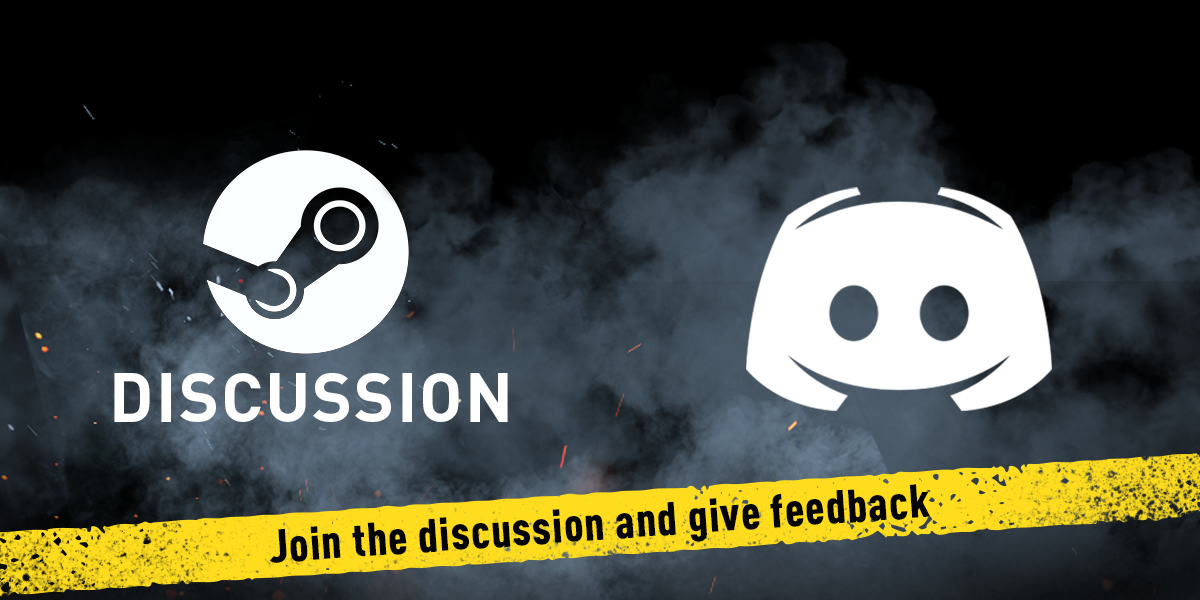 We will keep the VR Forum on steam for any VR related discussions. Now that VR is part of the main game all bugs should be reported in the regular Bug forum. We do however ask you to tag the bugs with [VR] in the title.

We also invite you to check out our Official Discord[discord.gg]
Here you will find our friendly moderators (as well as the unfriendly ones) and you might even find a few devs chatting. There is also a VR specific chat room and lots more.

How To Play VR

If you need help getting started with PAYDAY 2 VR please check the How to play PAYDAY 2 VR thread in the VR Forum. Here you can find controller diagrams and explanations of how to perform different actions and use the features in the game. 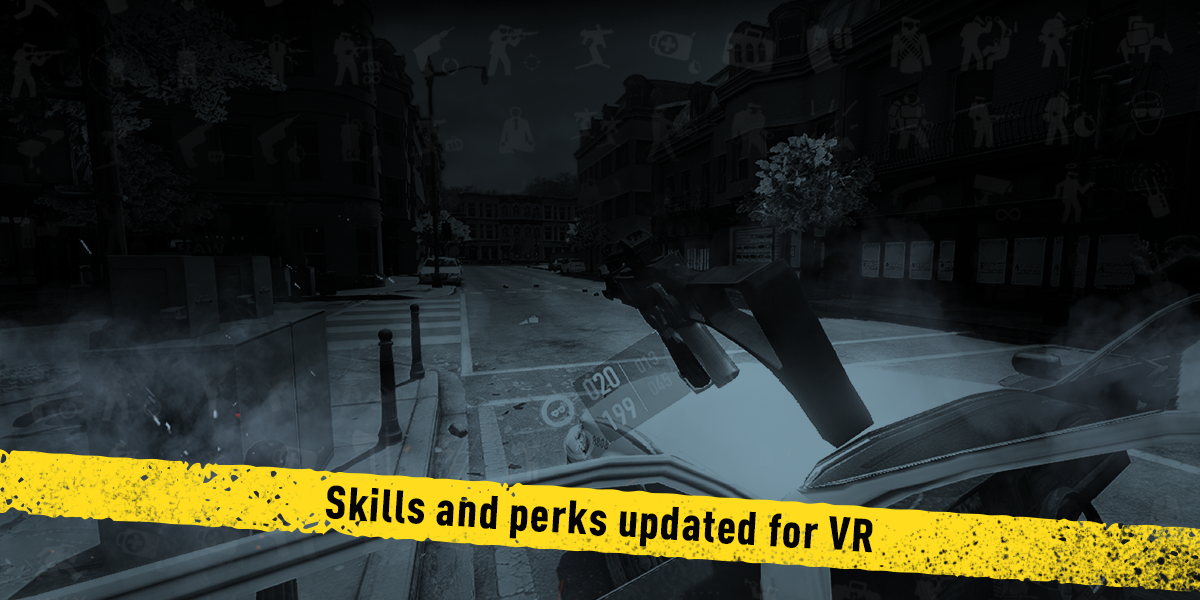 The VR players will have slightly altered version of the perk decks and some skills.

Differences between VR and Desktop players
All VR player will have a few default effects that are not bound to levels, skills or perk decks.
Enemies at a distance of 20m will be more likely to target you instead of other players. At the same time, these enemies will deal 10% less damage. The damage dealt will decrease further at longer distances, up to 75% at a 60m distance from the player.
VR players will also be able to run further and faster than a Desktop player, while consuming more stamina.

Aim Down Sight
Any skill that triggers on aim down sight will trigger by holding the weapon at head height in front of you (as in aiming down the sights).
These skills will give an accuracy increase when triggered:

While Moving
The skills that trigger while moving will have a special effect while using a dash style movement.
After a dash these skills will be active for 1-5 seconds depending on the length of the dash:

Mastermind
Sharpshooter – Rifleman – Basic
When used in VR this skill will refill 5% of your ammo pool for your single shot weapons for every 25 points of stamina consumed when dashing.

Enforcer
Shotgunner – Close By – Basic
When used in VR this skill will cause fear to enemies in an 8m radius around the player after a dash. The effect last 1-3 seconds depending on the length of the dash.

Technician
Oppressor – Lock N’ Load – Basic
When used in VR this skill will refill 5% of your ammo pool for your automatic weapons for every 40 points of stamina consumed when dashing.

Ghost
Artful Dodger – Parkour Aced – Aced
When used in VR this skill will increase your reload speed by 20 – 50% depending on the length of the dash.

Perk Decks
Perk decks have given an “on dash” ability. When performing a dash the player will gain a certain amount of Health, Dodge or Armor. The amount given will scale with the length of the dash. The benefit will also be dependant on how far you have upgraded the perk decks.

Perk decks that give armor will restore 2 – 6 armor points per dash with perk 1 equipped
and 10 – 22 armor with perk 9 equipped. You can recover armor 3 times every 3 seconds. This affects the following perk decks:

Perk decks that give health will restore 0 – 3 health points per dash with perk 1 equipped and 0 – 15 health with perk 9 equipped. You can heal 50 points of health every 3 seconds. This affects the following perk decks:

Perk decks that give dodge will restore 1% – 6% dodge points per dash with perk 1 equipped and 1% – 10% dodge with the 9 perk equipped. The effect lasts for 3 seconds after dashing. This affects the following perk decks:

Anarchist
The perk deck gives you between 1 – 3 armor points per dash with perk 1 equipped and 5 – 11 armor points with the 9 perk equipped. The effect lasts can only occur 3 times every 5 seconds

Considering the big changes to the game, there is a high risk of crashing if you have any type of mod installed. Even cosmetic and purely visual mods may cause unexpected behaviours.

Any mods you have installed may interfere with the update please disable them to avoid crashes until the modders have had time to update the mods. If you are experiencing crashes please read this thread for more information.