Today we bring you a smaller update focused on the game’s meta. Specifically for low damage assault rifles, also in this update, there are some performance optimizations for the shotguns. There are also a few tweaks to specific weapons, like the concealment of the RPK to allow for crit build and a buff to the ammo pool of the Lebensauger .308. Check out the patch notes for all changes and tweaks.

But that is not all, there are also some interesting tweaks in regards to scopes, both how they function in-game and additional info while in the menus. Finally, we’ve improved the lighting in the weapon customization view, so your guns will look their best while you tinker and tailor them to your needs and desires.

And another note for the Dead by Daylight heisters out there, we’ve talked to our previous partners in crime over at Behaviour Interactive and together we now have made the Feeder and Dendron masks available to anyone who owns the base game of Dead by Daylight. Previously you had to own the Deluxe Edition, but since that edition is no longer available we wanted to make sure the masks were still easily obtainable. If you haven’t tried these horrific masks, now’s your chance!

Each shotgun fires a number of pellets (hit rays). If one or more of these would hit an enemy the weapon’s damage is applied. This means that if multiple rays hit an enemy it still applies the same amount of damage as if only one ray would hit the enemy. These rays can be very performance-heavy. We have adjusted the number of rays per weapon based on the damage class. Higher damage weapons and slower firing weapons will keep a higher number of rays. Fast-firing and low damaging weapons will have fewer rays. This will yield improved performance, especially on older machines running games with multiple shotguns present. The Joceline O/U 12G, Mosconi 12G, and Claire 12G Shotguns will remain unaffected.

We have also looked at some of our Assault Rifles. We want to bring up the DPS of the low damage class of assault rifles in order for them to be more balanced against their mid damage counterparts. To achieve this, we’ve increased the damage for the low damage class. We’ve also addressed the long reload times on some weapons. This issue has been addressed in different ways depending on the weapon. Some weapons have had their reload time reduced, others have had their total ammo increased or an additional damage buff.

Another change you certainly will notice is the scopes. We’ve altered the look of the scope while you ADS to give a better view through the optics. This will let you see more of the battlefield downrange as less will be obscured by the sight itself. Looking at the stats block in the menus, you will now see the strength on the scope listed as the scope’s zoom level. 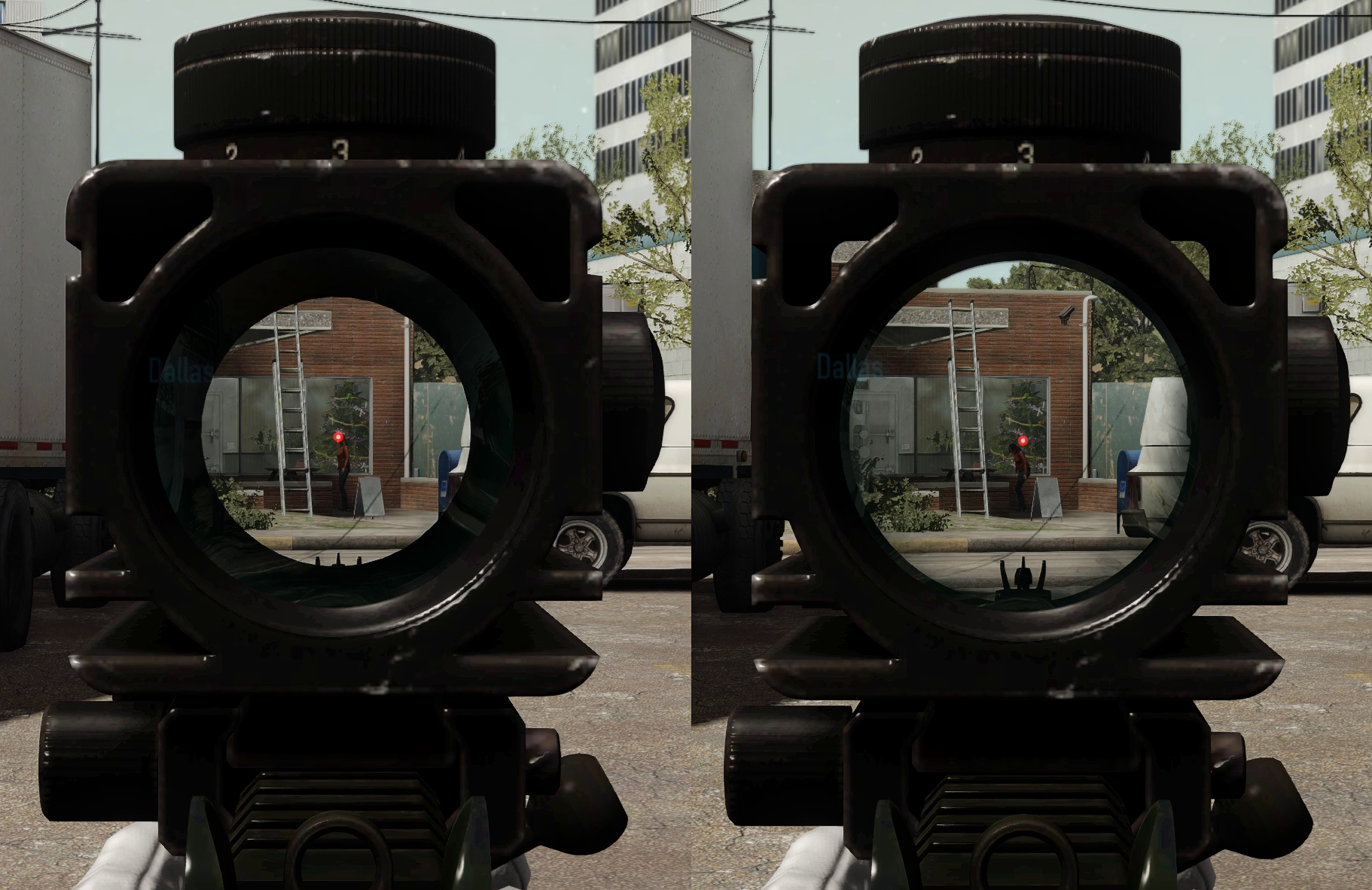 Compact Tactical Box Sight, before and after scope changes

Let’s put some rounds down range and dominate the battlefield.
OVERKILL_Tobias
OVERKILL – a Starbreeze Studio.