America is truly the land of opportunity.

And, being a businesswoman, I am always ready to explore opportunities. I am looking to break into the American firearms market. A large shipment is en-route to the East Coast. For this first shipment, to test the waters, I am looking to gain a market share by providing mods for the classics – the CAR and the AK.

These two weapons are in the hands of almost every gangster, heister, vigilante and right-thinking citizen in America. They are classics with good reason – few weapons can match their versatility. Indeed, their success over the decades has been built on that very concept. Simple, robust weapons that can be modded to specialise in whatever role you wish.

The AK has its roots in the Second World War. Soviet doctrine called for an overwhelming force of firepower. They could waste bullets as they wasted lives. So, the AK was born. It is accurate and powerful. But, in the best Soviet traditions, it is spartan and austere. Easy to build, simple to maintain and virtually impossible to damage. The AK’s fearful reputation across the globe is well deserved. Click the modifications to read more about each one. 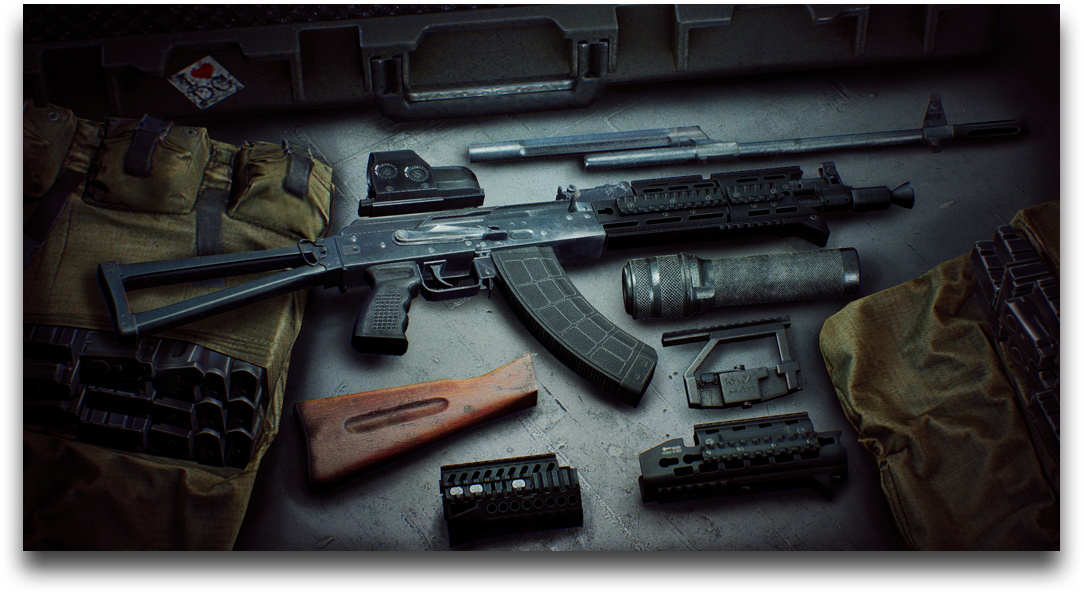 Developed by the Soviet Spetsnaz for infiltration operations in Afghanistan, the PBS is the prime choice for special forces looking to keep things quiet. 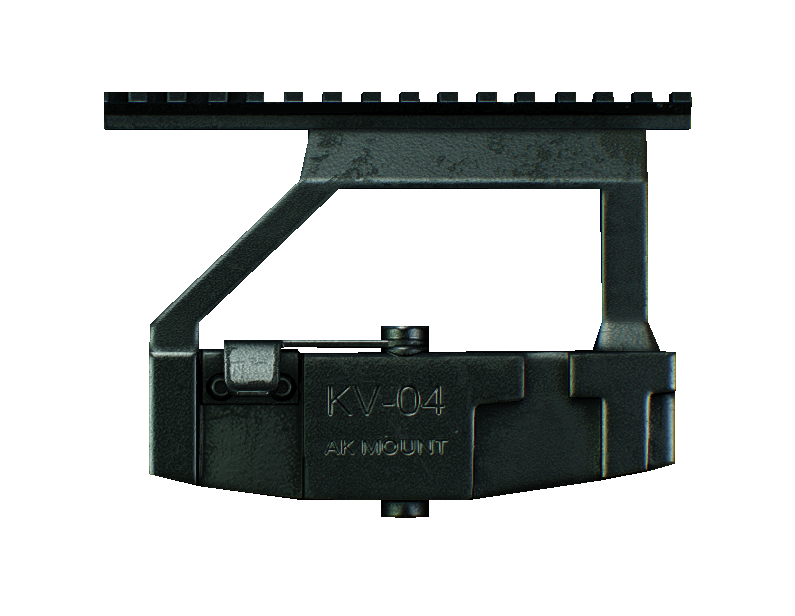 Before being nationalised, the KV family was a market leader by allowing a wide variety of scopes to interface with their mounts. 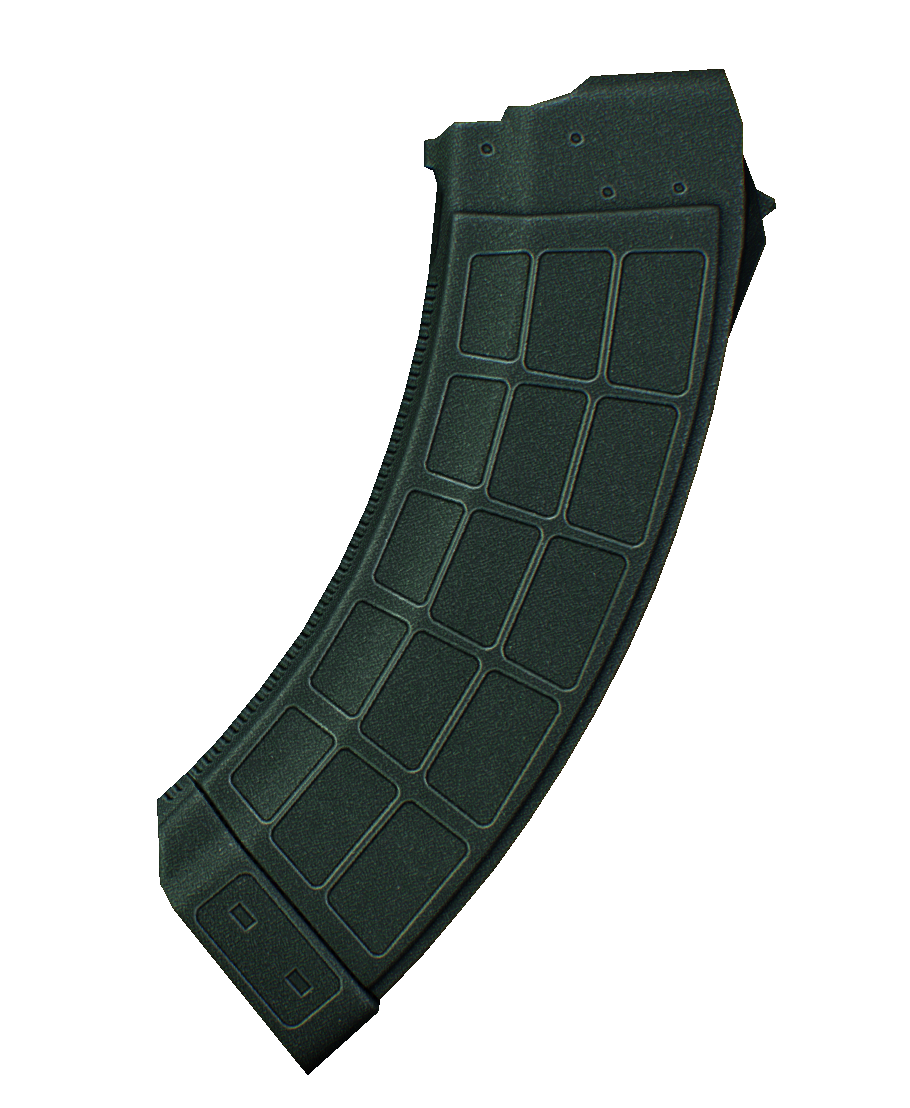 This foregrip is based on a design favoured by the Crimean 'Berkut' special marine division. A firm grip is needed when fighting Black Sea pirates.

Limited numbers of this foregrip were developed for combat trial, and it was eagerly accepted. Production is scheduled for 2016, so this prototype is highly valued.

Constructed using materials developed for the T-95 tank, the modern barrel makes the AK the match of any modern gun on the battlefield. 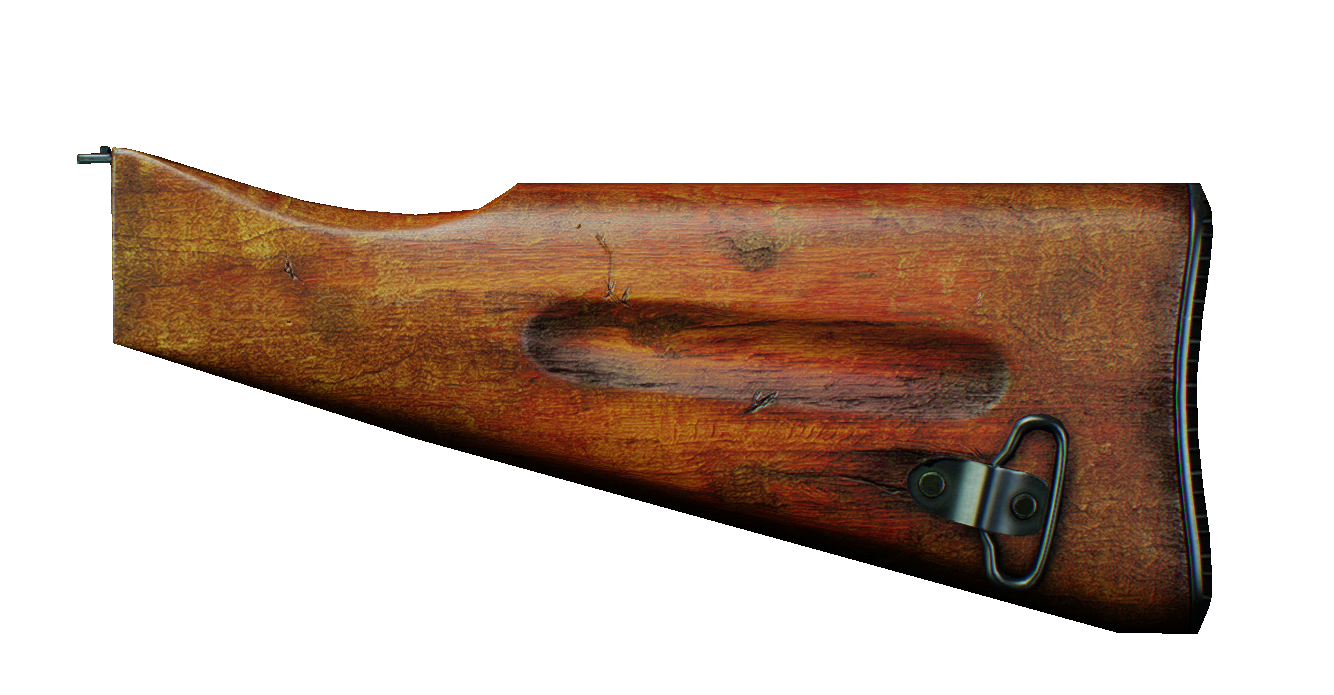 Originally made for movie replicas, this classic stock – fashioned from Romanian cherry wood – has become a stylish and effective favourite. 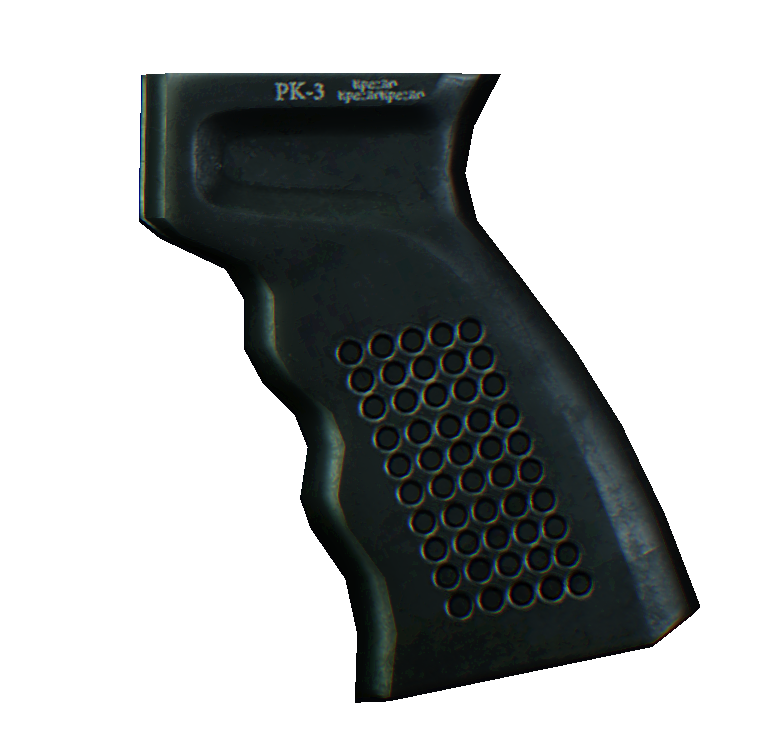 In true Soviet style, this grip is simple yet effective. Though supplanted by new models, most discerning veterans will seek out this old school favourite.

A battle proven barrel, the DMR lives up to the AK's reputation for reliability and durability. 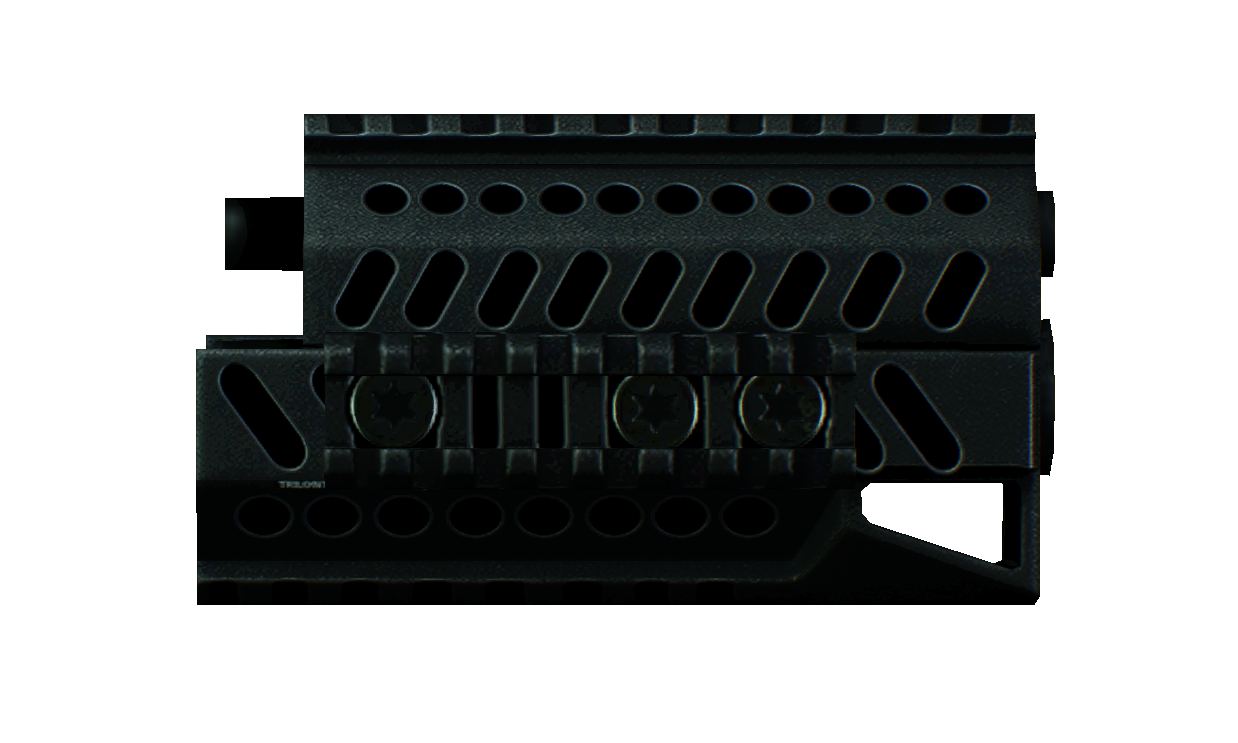 A modern grip, this aluminum model has found much popularity with Spetsnaz. Who wouldn't want reduced weight in the face of increasingly uncertain challenges.

In the States, from the wildernesses of Alaska to the beaches of Miami, the CAR is a symbol. It is a symbol of democracy. It is the muscle in the arm of freedom. It is as American as apple pie. And nations across the globe have been force-fed a serving. With the CAR, you support American jobs – surgeons, insurance brokers and undertakers.
Click the modifications to read more about each one. 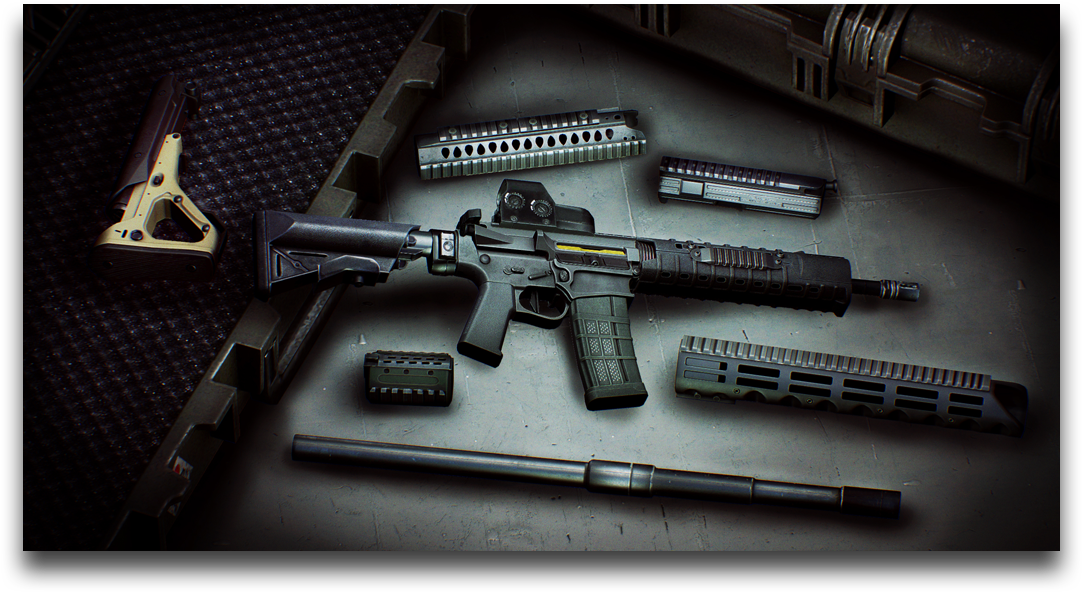 The L-series of magazines have been the mainstay for US police for over 60 years and with good reason. Advanced polymers give it steel strength and silk weight.

The OVAL foregrip is a versatile component that offers excellent grip in wet conditions - whether it's raining water or blood.

Although not officially endorsed by any US agency, the E.M.O. foregrip is favored by Tier-1 US special forces operating in urban environments.

Tooled to match the THRUST lower receiver, this component matches it's upper partner for production quality and American values. 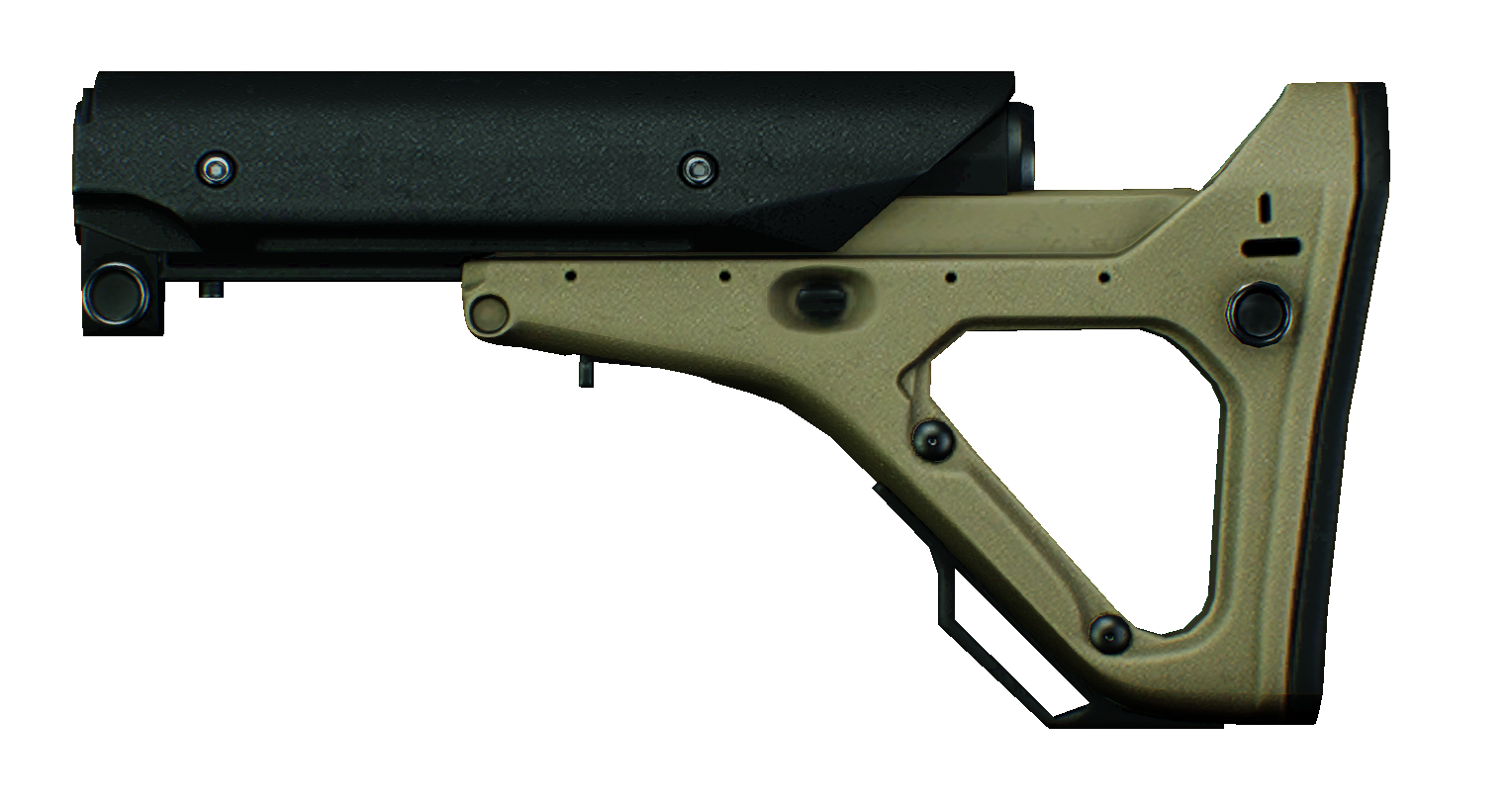 The superb 2-piece stock is ergonomically designed to fit the user. Research shows that American shooters expect comfort when killing.

The Long Ergo foregrip is a stylish addition to the CAR rifle. It is favored by our boys in the Marines, and that's all the reason you need.

The LW Upper Receiver was designed specifically to save weight, with an eye towards the market section that may also be carrying loot bags.

The DMR barrel kit is a must. Hand-tooled so it is rare on the market, it is nevertheless desired by everyone from infantry grunts to the President himself.

The Aftermarket Shorty was designed specifically for urban SWAT, where it's compact design is useful when storming buildings.

We’ve had a new batch of masks prepared for you. These were a special commission for Chains. We’ll let him explain:
“You want to know why I was so nuts over these dinosaur masks a couple years back? Ever since I was a little kid, I always wanted to be a dinosaur. Don’t laugh. Seriously, man. The idea that, once, long ago, these giant fucking lizards, tall as houses, stomped about the hood… oh man, what that did to this young kid’s head. Here are some of my favorites….” 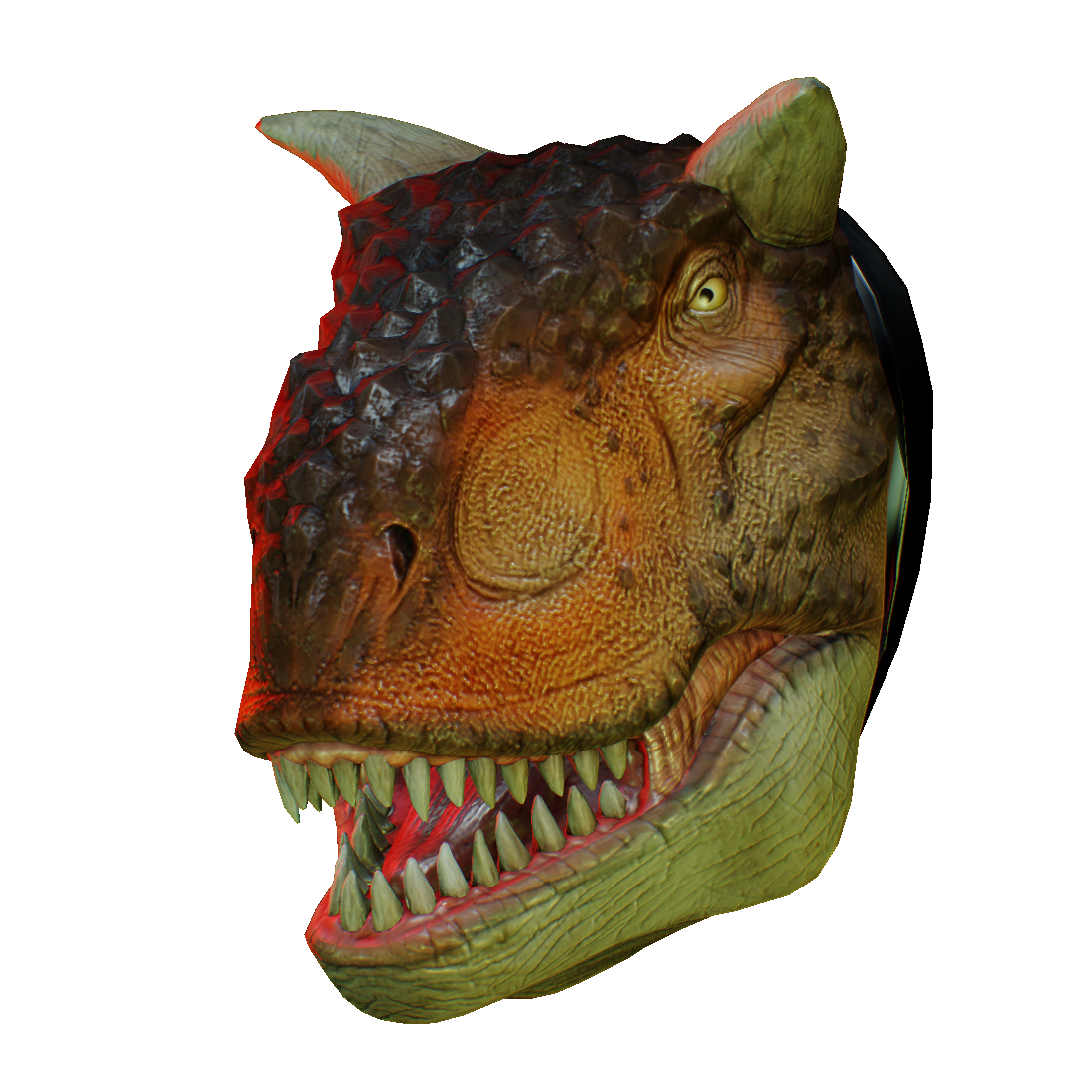 “You all know the T-Rex, right? The big motherfucker that could eat cars. Well, this dude is like that, except, give him fucking horns. They found this guys bones in South America. The lab report came back, and it tested positive for bad assery. The horns, man. Looks like a dinosaur Sith Lord.” 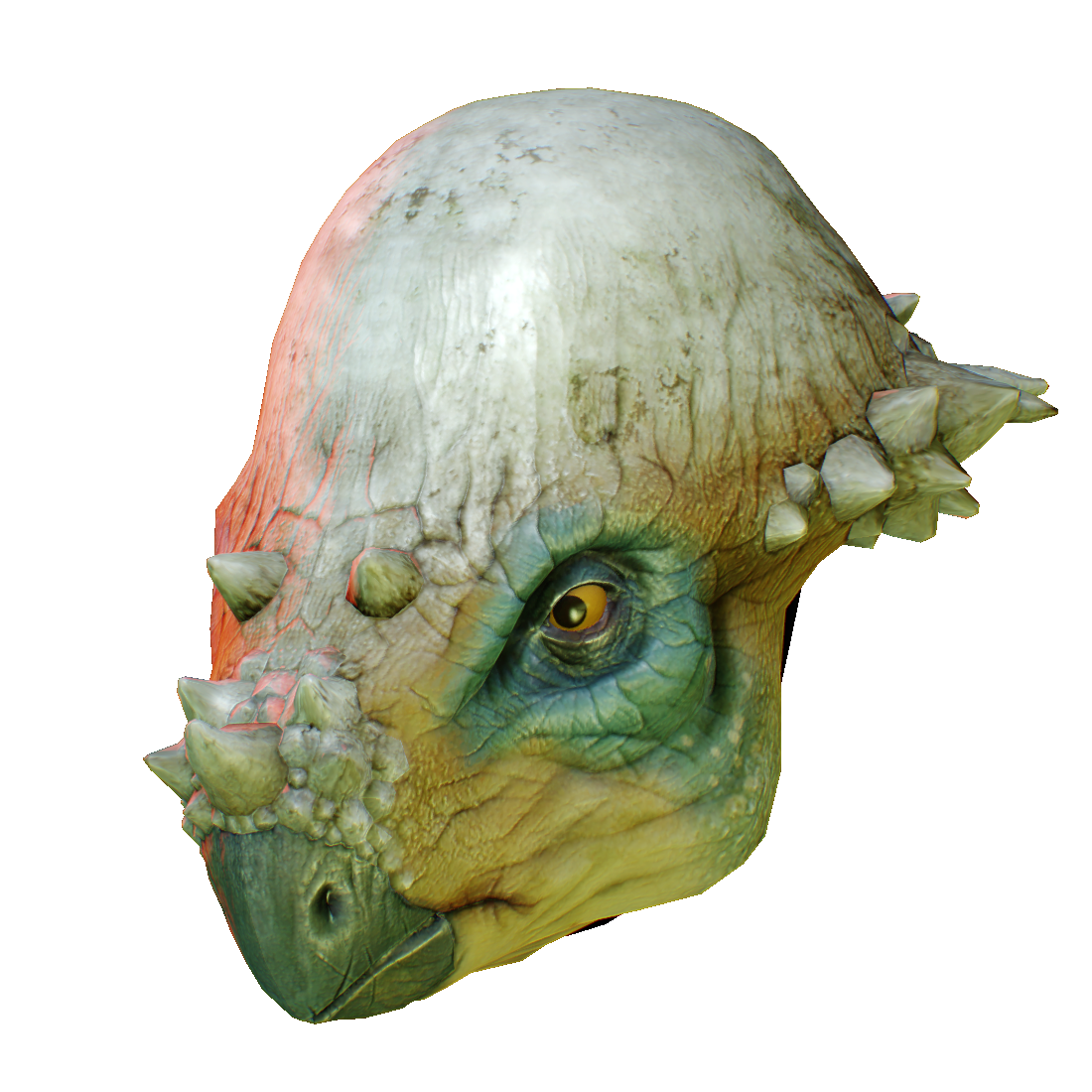 “Now the Pachycephalosaurus is a personal favourite, and with good reason. I mean, look at that fucking bonehead. I’d pay all my money from the next hundred jobs to have the skull of this fresh motherfucker in my house.” 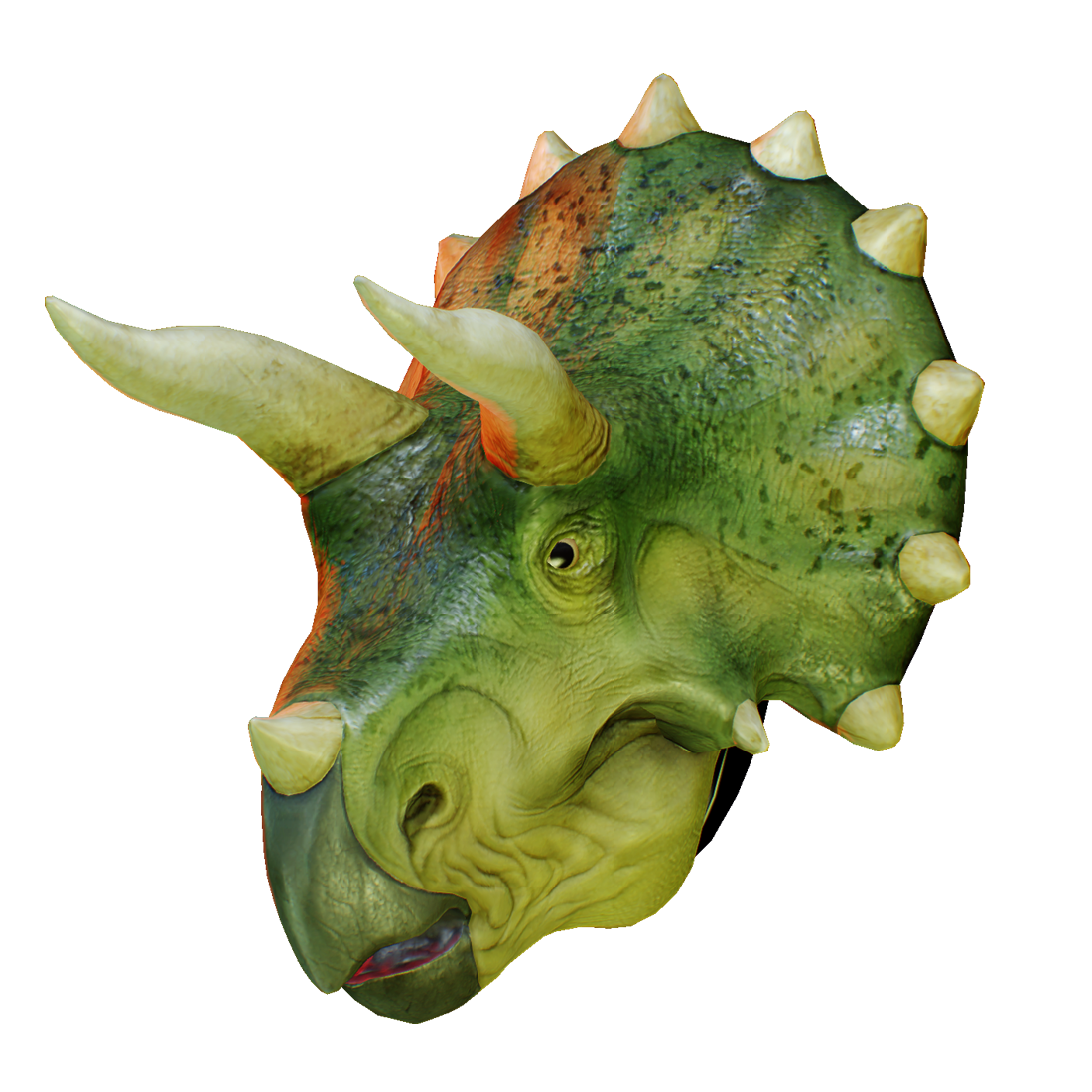 “The triceratops ia one bad-assed motherfucker. Look at those horns, man. That’s where it gets it’s name from. It’s Greek for three, that’s the tri, cera, which means horn, and ops, which is face. Three Horn Face. How cool is that? Anyway, this guy will fuck you up.” 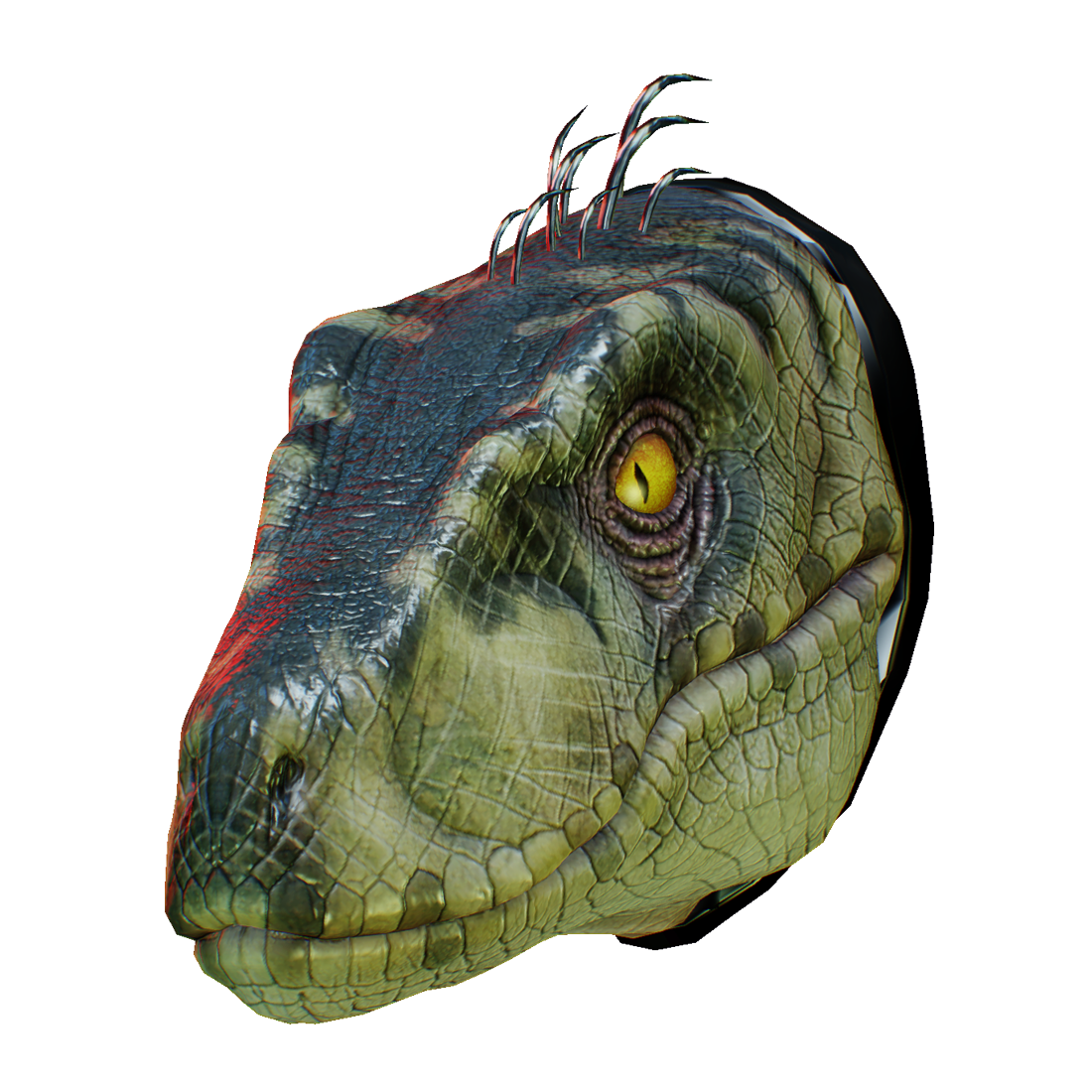 “Now, the velociraptor. You’ll remember these guys from that movie. What was it called? I can’t remember, but it should have been called “Bunch A Motherfucking Dumb Ass Rich Kids Sit Around Eating Ice Cream Which Is Just Fattening Their Asses For The Baddest Beasts In The Jungle The Motherfucking Raptors.”

And you to prove that you’re up to using these customizations, we’ve created a whole batch of new achievements.
Test your mettle and unlock these desirable mods!